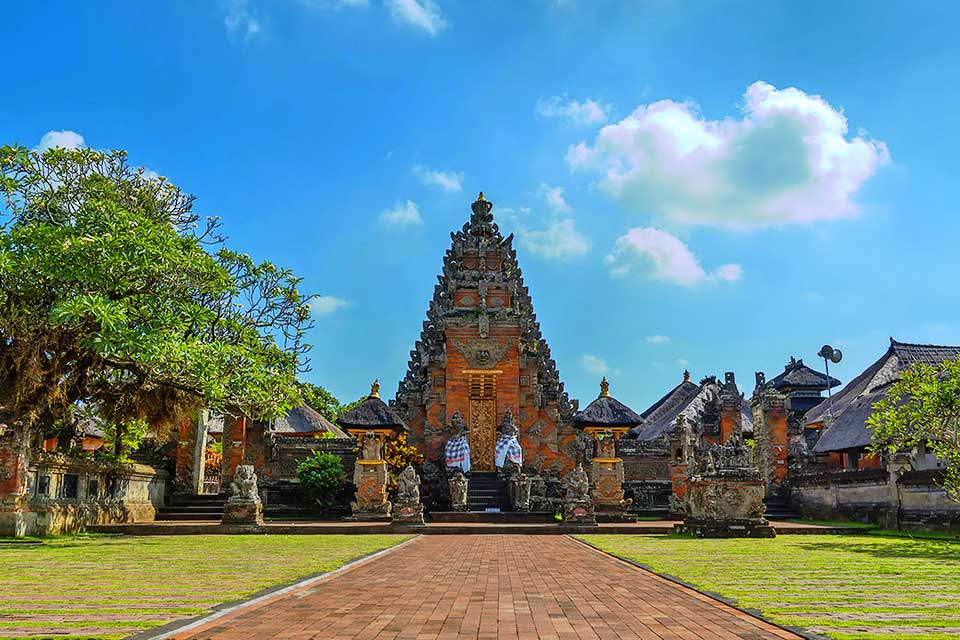 Bali Batuan traditional village is famous place to see because where you can see the traditional Balinese house design, Batuan temple, Paintings art production make this village such as famous Bali tourist destinations. This village is located about 10 kilometers south of Ubud and 7 kilometers north of Denpasar. It is popular with center of Bali painting arts. We have lots of tours to Batuan and Ubud painters – where you’ll see the beautiful paintings and they have Bali paintings for sale too. You will have a chance to see how they do this painting and the details from starting until they finish it. It is a talented job and not all the people can do it.

This Balinese traditional painting was restricted to ceremony aspect such as religious part, calendar and leather puppet (Balinese: wayang). This period was called as Kamasan or Wayang style before 1920 and Wayang itself is two dimensional drawing that characterized an hindu-Buddhism epic such as Mahabharata and Ramayana. These paintings were used in the temple or palace as ornament. And illustrated many stories about Bali life and religion. It is a piece of painting that tells a story. The name of kamasan style was taken from the village name where it originated. Traditional material used for this kamasan style from mineral and vegetables or plant resources. Also they use white bone, soot, or stone. Bamboo used as tool to painting and the media we call it canvas usually traditional canvas from wood, tree leaf, or cloth. And western artist visited Bali In 1920, and changed the rule on Balinese art painting. Then they introduce of new canvas from western material, inks and paint, has change the style into modern art painting. The year has start a new way of Balinese modern art painting.

But Batuan village wasn’t influenced by the western as they were in Ubud. They keep maintaining What the Batuan paintings were, often dark, and crowded representations of either legendary scenes or themes from normal daily life, freakish animal monsters, and witches accosted people. The Batuan Village paintings were gradations of black to white ink washes laid over most of the surface, so as to create an atmosphere of darkness and gloom.

The story began For over a thousand years Batuan has been a village of Balinese Artwork and Bali painting. with the recorded history, Batuan village has a thousand year old history in accordance – begins in A.D. 1022, with an inscription that is housed in the main village temple,Batuan temple. In the Age of Warmadewa Dynasty in Bali, Batuan Village had to be there, from the word of Batu / Rock, This village eventually came to be called Batuan. Because – in that time – in this region is a rocky area (the famous Balinese sand stones are still produced here in northern of Batuan), then because of daily changes in the pronunciation then more popularly known as Batuan Village.

This Bali Batuan temple is a village temple and looked after by the local people in Batuan countryside. The temple is designed full of Balinese ornaments and the roof temple building is made from the fiber of chromatic black palm tree make this temple looks very beautiful to see.

It is strategically located beside of the main road from Denpasar to Ubud. For over a thousand years, Batuan has been a village of artists and craftsmen, old legends and mysterious tales.

In this temple, the people from the village will provide sarong to cover the half body down before entering the temple. And also they have a donation box and recorded book for the tourist to write their name and how much donation they put in the box. The money that they collect will be used for making the offering when the ceremony day comes.

History of this temple is the name “Batuan” or “Baturan” mentioned here prompts villagers to joke about being “tough as stone” or “eating rocks” and batu means “stone” in Balinese. But it likely refers to an ancient megalithic tradition that standing stones served as meeting places and ceremonial sites for the worship of ancestral spirits. The village has an unusual preponderance of Brahman, because Batuan became a center from which Buddhist priests and Brahmans spread to the main court centers of south Bali.

And the local people are very concern about the care and preservation of the temple architecture and its environment. The buildings are some that have undergone renovation, renewal, and change from 10th century to 13th century and also 18th century AD. The structure and foundation of this temple are very tough and strong. It has the original Balinese ornament that craved on every building at this temple area beautifully. Some ornaments are reflection of The Ramayana Epic story and every holy building has different function philosophically.

Every tourist that visiting Batuan Temple, will provided Sarong to cover half of the body down till the legs before entering the temple, it is because the culture of Hindu Religion in Bali to put some respect for the sacredness of the temple. And the end of the visit we may do donation for the temple by putting some cash to the donation box and the amount of money that is up to the tourist how much is their willingness to do donation.

One Thought on “Batuan Traditional Village”